I noticed that a game landed in Gentoo portage :

Tiny and big is an interesting mix between a platform game, FPS, puzzle and physics game.
Simply put this is the best game I ever played on Linux. I played it with my sandy bridge despite the intel graphics beeing not supported and I had to run driconf (you need to emerge x11-misc/driconf) to enable S3TC texture compression.

The game was definitely playable despite a weird bug with the fonts, all the texts disappeared 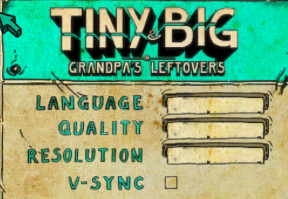 So I missed the dialogs but even without them, the game is awesome : you play a little character in realistic physic world where you can cut huuge parts of the landscape, drag the parts with a cable or push them by sending it a little rocket in order to achieve your goal either in action mode and/or puzzle mode.
You can see some of the gameplay in the official trailer:
The game is a little bit short but I hope a follow up will be made. It is really nice to see such a nice game on linux from an independent studio.